Greetings everyone, today we’re going to have a look at Monetization in PBBGs and my own personal views and experiences with the subject.

Before we go into the subject of Monetization it is important we need to look at the concept of Exchange. Exchange in this sense is the concept of giving something that is valuable and exchanging it with something else of value. This is most often seen as a product or service given in return for money.

The majority of PBBG Games you will find online are free to play and if not entirely free, they are free to a rather large extent. Many of these games have options that allow the player to exchange money for in-game content and this is what we’re going to discuss today.

One of the reason that Monetization plays an integral part of many PBBGs games is because the developer have to maintain at very least the upkeep of the server costs and very often they involve some sort of multiplayer aspect that require these servers to be strong enough to be able to deal with providing that gaming experience to you. Secondarily for a rather large extent of PBBG Developers it is an additional activity that they allocate time for and they want to see some return on the investment of what little precious time they have left to invest into the project.

Next we get into the famous subject of p2w, which is a rather scorned subject and in some cases rightfully so. When you’re dealing with multiplayer games and you sell direct power to players it instantly turns into a p2w game, which results in the players which have money and the willingness to spend it on your game, taking a superior position in comparison to the rest. The “game” moves away from a great combination of mechanics, graphics and interplay of players into “who has dumped the most money into the game”, and very soon your game doesn’t exist anymore.So how does one implement monetization into your game in a way that it does not become an outright p2w game? There are several different ways and here are some of them:

To the above bullet points I want to add another mechanism that doesn’t entirely do away with the p2w approach but to a rather large extent does dull down the negative effect of it. This is done through player economy and trading. I’ve personally seen this work great in a couple of games I’ve played and I will give you a rundown of how this works.

Once you’ve enabled the above approach it balances out a lot of the otherwise p2w features that you choose to implement. This works because when you allow the player to introduce premium currency into the game through direct payment and make it tradable you directly put in the worth of that currency into the hands of the players. This makes the players directly influencing how much this premium currency is worth to them. To give you a very real example that demonstrates what I mean:

“Player A” buys 10 Premium Currency, which we will call “Credits”. With these 10 credits, he can either purchase one month of boost to leveling speed and gold drops (let us say 10% boost), or he can take these 10 credits and sell them to “Player B” against some gold here and now.

What happens is that either way he has achieved a greater potential in the game, and to some extent he has paid to win that game, but at the same time when he chooses to sell these credits to “Player B”, you have put the “Player B” in a position where he has traded some of his current gold for a one month boost!

“Player A” wins naturally no matter what, but the rest of the non-paying players that buy these currency wins too because they get to experience those same set of premium features without having to cough up with actual money. Best of all, they get to control how much they want to cough up with to experience these features. This puts the non-paying players in control of the value of this premium currency and not the developer.

I personally like this approach very much because it forces the developer to put attention on creating a great game that players like to play, that is interesting and feature rich. In that way when the developer does a great job at catering to all the players, the interest in the game will go high and you will achieve a more balanced p2w approach than outright buying wealth and power.

Both Queslar and Elethor have a sort of “VIP” system where you spend Premium Currency in order to achieve a percentage boost in experience and in-game income. These bonuses are minor and the boost percentages hover around 5-10%, however still worthwhile for those who want to either pay directly for it with money or offer some of their hard earned in game currency in exchange for these boosts.

However pretty much in all of them you have the option to spend those premium currencies to extend the duration you can be away from the game before you start to slow down your progress. In some of them you can buy fancy titles and special cool icons that make the game a bit more interesting to play, all of which are great examples of non p2w approaches.

Speaking as a player that have personally thrown a decent amount of money into paying for premium currency in such games as above, I have firsthand experienced the benefits of this approach from a player point of view and I respect the need to have monetization implemented in games for them to be sustainable, but at the same time when you have games that are implementing a free to play path, remember that the game would not exist without the volume of players participating in the game and making it enjoyable for everyone including the people who choose to spend money on the game.

Going back to the subject of exchange that I clearly delineated at first I would like to expand upon that by saying that while you’re not paying for a game and giving exchange in form of real money like you do with some modern game releases where you pay upfront for the cost of the game, you do give back exchange in terms of being part of the player base and playing the game itself. This is mostly prevalent in multiplayer games where it couldn’t even be played without a substantial amount of players partaking in the multiplayer features of the game.

The balancing between both those paths are therefore of great importance to create a viable game and it would not survive without non-paying players and paying players alike. They each contribute in their own way to the longevity of the game itself and the creation and expansion thereof.

Hope you liked this short overview of Monetization in PBBGs and how I’ve experienced it done right and how I would like to see players experiencing PBBGs in terms of monetization and how it relates to gameplay.

Next up I will be writing a short blog post on the subject of AI Generated Game Art! Below are just some of the content I've been generating. Stay tuned for more!
(Side Note: This Article's Header is AI generated Art too!) 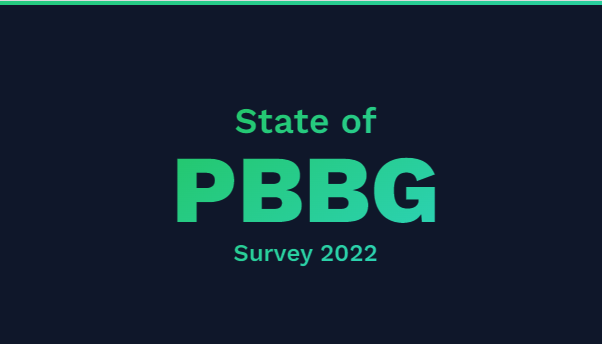 At last we have the results of our annual survey conducted in February. With 130 responses, we came in just under last year but with a lot less marketing. This year we also modified a bunch of the questions to refine them in an effort to create a more accurate picture of the PBBG landscape.