You can read the latest version of the setup tutorial under docs/setup-tutorial.md

Remember: This project isn't ready for deployment yet - it still has bugs galore.

MERN can stand for a few things, but in this case it means "MariaDB, Express, React and Nodejs". This are a series of technologies commonly used to create websites.

I determined that I might want to reuse some parts of the website I was planning to make, so I wrote the template first, to make it easier to reuse. Then, I released it so other people could use it too.

There are some requirements for this template, such as required software and a dedicated email. Software needed includes:

You'll also need an email address - if you use google, you'll need to enable "less secure apps" so external apps can access it. I've only used this site with google so far, but feel free to experiment with other mail hosts.

For development, you'll need Nodejs and MariaDB installed and working. Remember to run npm install in the git repo after cloning.

First, run sql/create_database.sql on your mariaDB instance - this will create a database called template and a user called `template`@`%`. You can of course mess with this, but everything else here assumes you do so consistently.

Next, copy .envdev into .env, then fill out .env with your details. Here's a breakdown of each field and what they mean:

The first two are used mainly for the email validation link at the moment - but they should still be configured correctly. WEB_PORT is used to specify which port the game operates on - when you reach the webpack stage, you won't access this port directly.

Now, I've use exclusively google for this - and it shows. The first argument is usually set to smtp.gmail.com. The second is to your email account (a fake one is set in the code, [email protected]_ADDRESS, but google overwrites this). The third is the plain text password for this account (so you should almost certainly use a dedicated email for this). The fourth is actually included in the validation email itself - it's a legal requirement of the USA's CAN-SPAM act of 2003, which goes over my head just a little (I try to appease as many jurisdictions as possible).

This is fairly simple - but if you tinkered in sql/create_database.sql, do so here as well. 127.0.0.1 just means "this machine", of course. The timezone is my own timezone, but can be set to any of these values (I think - haven't tested them).

Finally, these are crucial in production - so much so that they're completely randomized by the configure script. Here, however, you can set them to anything. SESSION_SECRET is used by express-session to save user session details, while SESSION_ADMIN is used as a sort of password for the administrator accounts.

Finally, it's time to run npm run dev. This will begin the server in dev mode - it'll use the concurrently library to run both client and server in the same window, so you don't need two monitor terminals. If all goes well, the server should start pretty quickly, though the client will take a moment to compile.

When they're both ready, you can access http://localhost:3001/ in a browser (NOT 3000) and the template site should load.

At this stage, your brand new website will call out to the dev-news server for news postings, so you'll get some lorem ipsum, and possibly other content (it's a publicly available server - don't blame me!).

From here, you can now start exploring and fiddling with the code. Feel free to contribute any changes via pull requests on github; I'm likely to accept them if they improve the overall experience. Even the docs are subject to updates, so check back if you need to.

In a perfect world, deploying to a server would be as easy as:

Sadly, this isn't a perfect world. So let's instead break down what I did for the tentative deployment.

First, you'll need a server with a domain name. I personally pointed both dev.eggtrainer.com and news.eggtrainer.com at the same server (You might be able to separate the news server later - that's why there's two URLs). I'm using linode for this, but be aware that linode blocks email access until you open a ticket requesting permission to use emails from their servers. It's easy - just don't abuse their goodwill. I ended up using debian as the OS, but anything that runs node and docker should work.

Then, I installed git, node (for npm) and docker-compose on the new server. Then I cloned the MERN-template into the server. Note that I didn't install mariaDB or run npm install - docker-compose handles these.

Next I ran npm run configure, which takes in a number of arguments and spits out a number of config files. Here's the default prompts:

These should generally be fairly self-explanatory, except the values in the parentheses can changed based on previous entries. If you make a mistake here, just re-run this. This script produces three files:

setup.sql is invoked by Dockerfile to create the database if it doesn't already exist, and docker-compose.yml invokes Dockerfile, among a number of other built-in containers (mariaDB and news-server). This will update regularly so check back often. If you want to delete any files created by configure, just run npm run clean.

Finally, it's time to run sudo docker-compose up --build. You might actually need to run it several times, killing the first attempts, as I haven't weeded out certain bugs yet. Remember - it's only in alpha, and not ready for prime time just yet.

Try again. There are timing issues between the different containers that I still need to sort out. If it still doesn't work after 5-ish attempts, keep reading.

Sequelize throws an error that a certain field is missing?

If you just upgraded the template, try checking if any changes to the sequelize models have occurred. If so, you'll have to go into the mariaDB container and alter the database directly.

OK, that's enough technical jargon and mumbo jumbo for a while. Next time, I promise we'll look at some actual design elements of Egg Trainer - things I've previously implemented, and things I plan to implement. You deserve it after two fully technical articles.

My name is Kayne Ruse of KR Game Studios, you can find me on the net as Ratstail91, usually tweaking someone's configuration files without their permission. 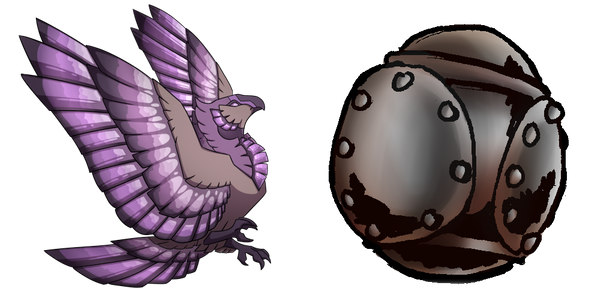 In this article, we'll go over the creatures, how they're designed, developed and implemented. We'll also talk about moves and their effects, and we might also touch on the items further down.

We're having a look at the news server. If you're familiar with a tool like cURL, you can follow along and play around with the live demo.